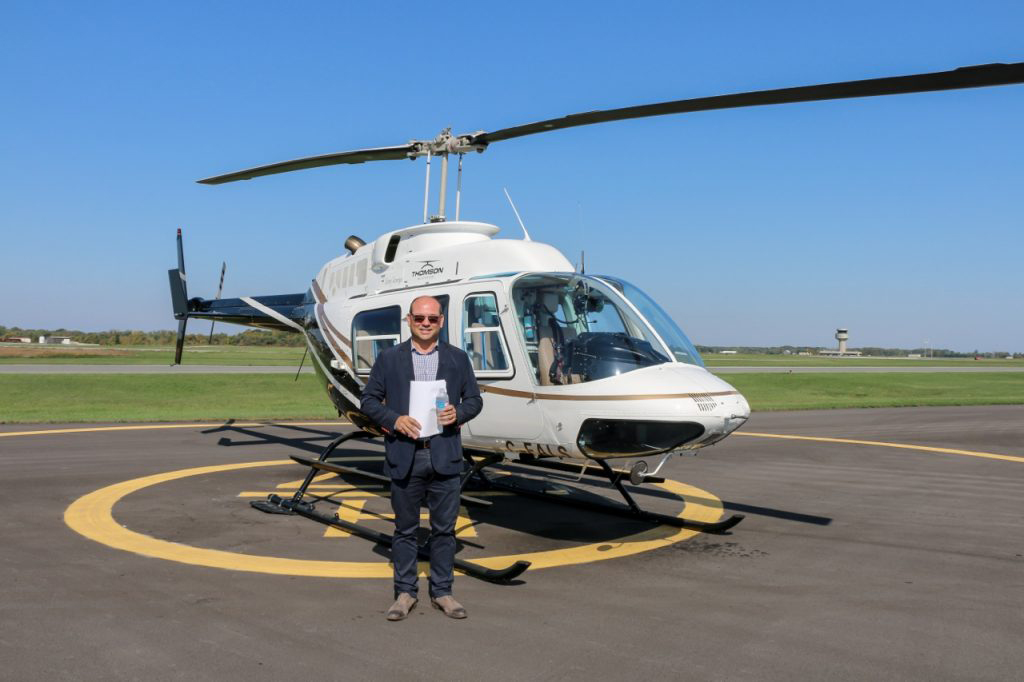 Losani Homes is bringing a taste of the Big Apple to Hamilton Mountain with the introduction of Central Park at 1809 Rymal Road East. The development is the latest master-planned community by the family-run developer which has built thousands of homes in southern Ontario since 1976.

“When you call something Central Park, it’s almost akin to having your kid show up to Atom Hockey the first day and dropping ’99’ on his back,” said Fred Losani, CEO of Losani Homes. “It’s a big order to try to keep up, but as a company I think we’ve put together a phenomenal piece of property that happens to be as we refer to it, ‘at the centre of it all’.”

The opening of the presentation centre is scheduled for this month, and to celebrate, Losani invited BuzzBuzzNews on a helicopter tour of Central Park and the surrounding area. Aside from a bird’s eye view of the site, we were able to get a glimpse of just how connected the community is to the rest of the city and the many local amenities.

“Central Park is at the crossroads of all the major transportation intersections that make up the core of Hamilton namely the Red Hill Expressway and the Lincoln Alexander Parkway,” explained Losani. “And, its connection to the 403 and the QEW really enables anyone who lives within the community to be able to quickly mobilize themselves to get to where they want to get to outside of heavy traffic.”

Some of the nearby amenities and conveniences that are within walking distance of the community include the SilverCity Hamilton Mountain Cinema, Kelsey’s Restaurant, Bishop Ryan Secondary School, The Home Depot, Best Buy, Sobeys and Shoppers Drug Mart. Even more attractions are just a short drive away like the 32.5 hectare Heritage Green Sports Park and the par-72 King’s Forest Golf Course.

Located in the Upper Stoney Creek area, residents of Central Park will also be steps away from nature. Directly across the street from the community is the 78 hectare Eramosa Karst, filled with underground caves, streams, and endless meadows and forests. Known as the waterfall capital of the world, Hamilton is also home to over 120 waterfalls including Centennial Falls, Albion Falls, and the famous Devil’s Punch Bowl.

Within the community, the tree-lined streetscapes will be complemented by decorative entry features and walking trails including the developments very own ‘Central Park’ inspired by New York City’s famous park. Characterized by curving paths and rolling topography, the large green space will feature a decorative pavilion and children’s play rings inspired by the 110th Street playground in New York. The park will be connected to the rest of the community via a five-acre eco-trail promenade dotted with elegant benches and classic Victorian metal light standards similar to the ones in New York’s Central Park.

“At the core of the community is this phenomenal promenade which actually links what is called the East Hamilton Trail Loop,” said Losani. “From the very beginning we worked very closely with the Hamilton Conservation Area to envision the connection of that 10-kilometre loop which crosses through the Eramosa Karst Lands, Felkirk Creek, the Bruce Trail, under the Expressway into the Mount Albion Conservation Trails and then back through our community and promenade again.”

As for the homes, the first phase offers a choice of 33 to 50 foot lots with some lots situated near the neighbourhood park and the Eramosa Karst. Prospective homebuyers will be able to choose from a variety of architectural elevations including the Modern Series, Tuscan Series and the Chateau Series.

When completed, the community is anticipated to house over 1,100 new homes.

Sales at Central Park start from the low $300,000s for townhomes and from the high $400,000s for singles. To learn more about the community, be sure to register online today at mycentralpark.ca.

For more information, visit the Central Park page at osanihomes.com.