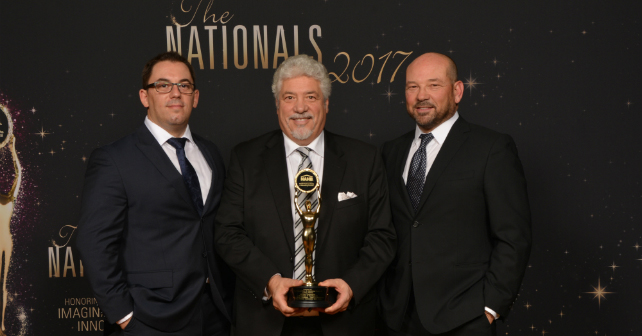 Recently, Losani Homes and the Losani Family Foundation were honoured with the 2017 Gold Award for Building Community Spirit at the National Association of Home Builders (NAHB) Awards!

CEO Fred Losani, Co-Founder & President Lino Losani and COO Davide DiDonato were in attendance at the awards ceremony in Orlando, Florida to accept the award on behalf of Losani’s staff, associates, trades, and supporters. Losani Homes was the only Canadian organization recognized for its builder-supported non-profit program or charity.

“We are honoured to receive this special recognition for our efforts at both the local and international level. And, we are committed to continue to lend our support to locally and internationally through Hamilton Community Foundation,” says Fred Losani. “We are fortunate that we have achieved great success in our home building and land development business. We take this responsibility seriously, but we are equally committed to and proud of the work done through the Losani Family Foundation.”

Losani Homes has been involved in assisting and supporting fundraising events for Hamilton-based charities for years, plus they raised money with adventurous excursions to the North Pole and South Pole, in 2006 and 2008 respectively.

This year, the Losani Family Foundation will make strides with their most recent project – bringing a clean water source to Los Rios, Ecuador.

“As Canadians, we are very fortunate. There are people all over the world that would love to be homeless in Hamilton,” said Fred Losani when we interviewed him last summer about Losani Homes’ philanthropic efforts. “We know we have a responsibility to make a difference. This has changed the culture of our company dramatically. We work towards being successful not just for ourselves, but so we can make a difference in our local and international community.”

Losani Homes is busy on all fronts. While the Losani Family Foundation is supporting growth internationally, Losani Homes is transforming the Hamilton area. Here are a few new home communities they have in the works right now:

Madison, the second neighbourhood of the master-planned Central Park community in East Hamilton is coming March 2017. Park Avenue, the first neighbourhood, was a huge success, and the upcoming release of Madison is highly anticipated. Madison will feature back-to-back townhomes as well as two- and three-storey townhomes starting from the $300’s.

Losani Homes is also collecting registrations for Vista Ridge, a community of townhomes and single detached homes in Beamsville. This new collection is scheduled to open this spring with singles from the $400’s.

Congratulations to everyone at Losani Homes and the Losani Family Foundation! We can’t wait to see what you accomplish in 2017.